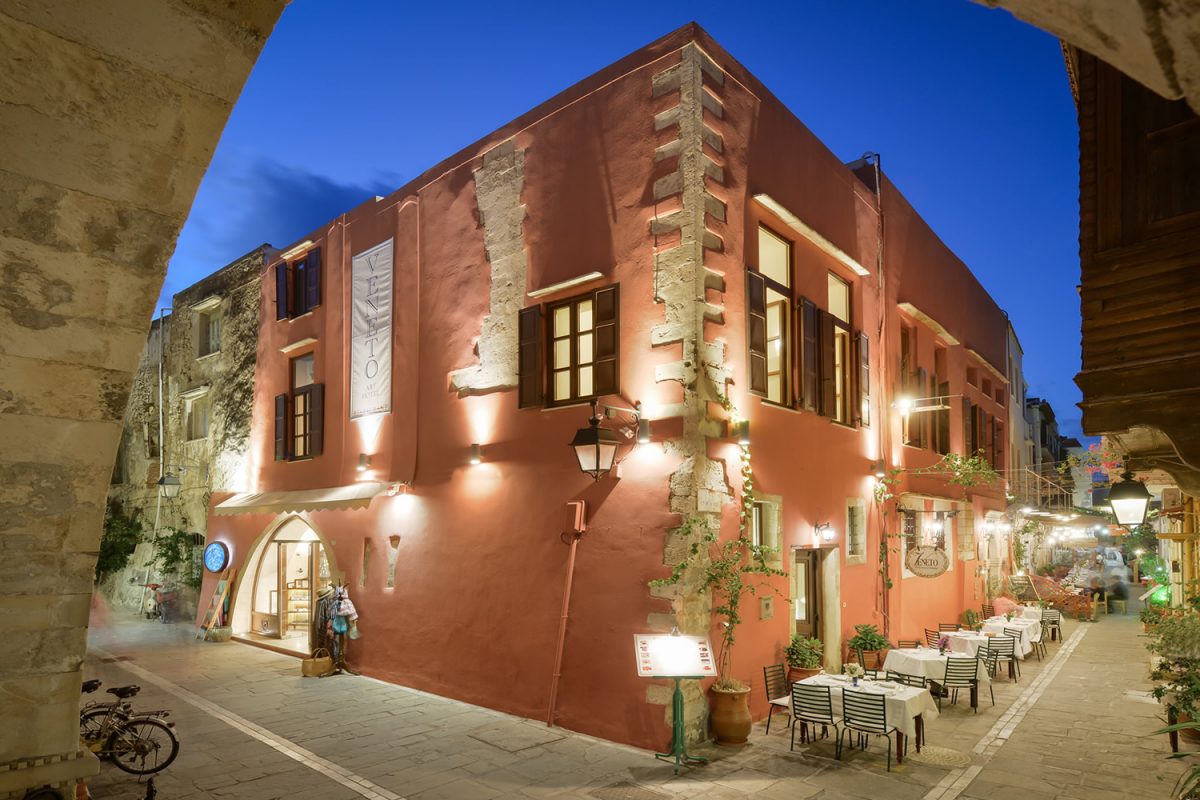 Rethymno is a beautiful and history-rich city situated on the western side of the island of Crete, Greece’s largest island. It is unique as it is the only city in Crete which is found nestled in a cape, and the breathtaking beauty of this ancient city strikes you as soon as you begin to approach it for the first time.

Rethymno’s old port is much smaller than that of many comparable cities on Crete, but what it lacks in size, it makes up for in looks. The entirety of the port is lined with spectacular Venetian and Ottoman-style buildings, setting it apart from almost anywhere else in Greece.

Rethymno was established by the Minoans, whose civilization which existed between 3000 BC to 1100 BC and was hugely important in the Mediterranean world during its heyday. The town was important enough to mint its own coins, and one of the designs on the coins of old has now become Rethymno’s crest: two dolphins in a circle.

Rethymno was mostly developed by the Republic of Venice, which made it an imperial subject in the 13th century. The Venetians decided that a commercial town needed to be developed between the two main Cretan cities of Chania and Heraklion, and developed Rethymno as a waypoint for such merchants.

Today’s old town of Rethymno, the “Palia poli,” was almost entirely built by the Republic of Venice. It is one of the best-preserved old towns on Crete.

Most buildings today there date back to the 16th century and feature arched doorways alongside Byzantine and Hellenic-Roman remains and a Venetian old harbor.

The town was captured by the Ottoman Empire in 1646 during the Cretan War. This led to almost three centuries of Ottoman rule, and “Resmo” (the town’s name in Turkish) was the center of administration for a province in Ottoman times.

This town is even more historically significant, as it played an important role in World War II.

One of the most incredible draws of the city continues to be the beach, which is 12 kilometers (7.5 miles) long. It is characterized by its bright blue waters and fine-grained white sands. Visitors hail the beach as being one of the nicest anywhere.

However, Rethymno has a great deal more to offer travelers than just its stunning beaches. The town is also ideal for people looking to have fun at any time of day (or night!) due to its massive population of students.

Rethymno is the official seat of the University of Crete, which educates more than 20,000 pupils. The young people who reside in the town are mostly respectful, and certainly add something special to the area!

The city is also very well organized, with paths that lead all around it. Visitors can follow one of these picturesque paths to the different touristic draws of Rethymno, including the Castle of Fortezza, the Archaeological Museum, and the Rimondi Fountain.

The fountain acts as a main meeting point for most Rethymno natives and its crystal-clear waters, supplied by Mount Vrysinas, keep people cool as they wait for their loved ones.

Where to stay in Rethymno

One of the most incredible hotels in the city is named Veneto Hotel, which is excellently managed by Loguers Hospitality.

The Veneto Hotel is located in the old city and is housed in one of the most historic buildings in the whole of Rethymno, the old Dominican Monastery, which was built in the 15th century.

“Relax in a unique environment of 600 years, in a journey of images and flavors, in a city ready to embrace you and surprise you…” says the manager of Veneto Hotel, Yannis Prokopakis — and he surely has a point.

The building has been renovated while fully respecting the style and architecture of its time. The Veneto Hotel’s rooms come fully equipped with all the comforts of a 4-star hotel while continuing to maintain a combination of traditional and modern character.

The hotel also makes sure that guests do not lose any sleep on their holidays. Veneto is very quiet, and the importance of a nice comfortable mattress has not been overlooked — it is a sleeper’s dream!

One of the gourmet seafood dishes the Veneto Hotel restaurant offers to guests. Photo courtesy of Veneto Hotel.

The hotel itself can offer guests a full experience of Rethymno without the need for painstaking planning and research. Veneto has had its own renowned restaurant since 1997, where you must try the best of the local cuisine.

The restaurant attached to the hotel has made an independent name for itself as one of the top restaurants on Crete, having even been certified by the Agro-nutritional Cooperative of Crete, receiving the label “Cretan Cuisine.”

It has also been awarded a gold medal for its wine list by “Vinetum,” making a wine tasting experience at the Veneto Hotel unmissable!